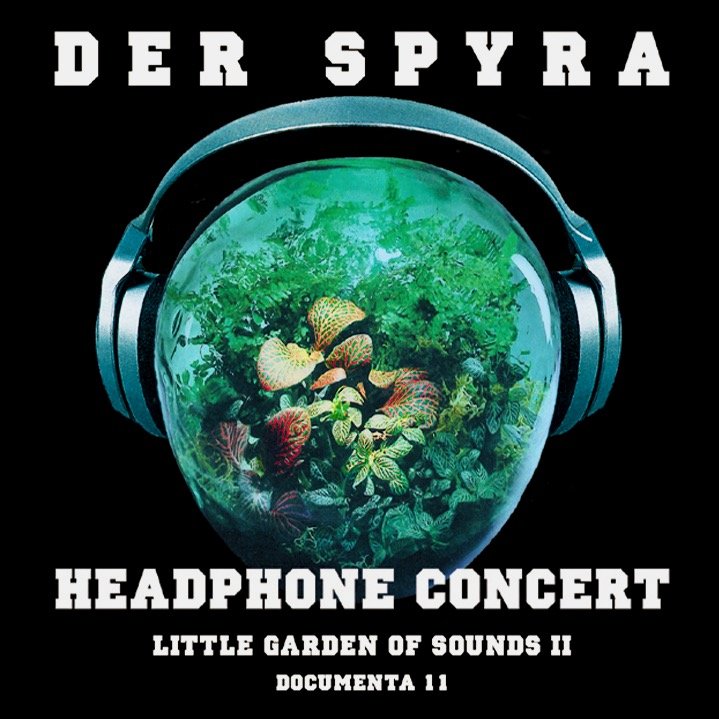 "My little garden of sounds" is a concept for a musical event that took place within the framework of Documenta (an exhibition of contemporary art). The special thing about such events is that unprepared visitors are supposed to get to grips with the music on offer as one of the many art offerings. For the musicians, under such circumstances, it means responding to the environment and sceptical art consumers, engaging in discussions and conversations with the audience, and exploring new possibilities of presentation.

In 2002, Wolfram "Der" Spyra and his guests gave three headphone concerts. At least one of these was on 2 September 2002, as part of Documenta 11. Headphone concert means that wireless headphones were available to each visitor (as well as the musicians). This may have meant that there was more or less silence in the hall during the speakerless concert, except for unamplified sounds from the violin, flute or percussion. An unusual performance for me as well as for the visitors passing by.
At the beginning, the flute player Jochen Krajewski asks the audience to put on their headphones and off they go with the 25-minute piece "Jeden". The first part of the piece consists mainly of the electronic foundation of sequencer patterns and soft keyboard carpets reminiscent of Klaus Schulze, supported by discreet interjections by violinist Jo Mar Gardena. This is contrasted with fusion-like guitar solos by the Polish guitarist Robert Golla (who has already played with Jozef Skrzek's band, among others) and, for a short time, slightly alienated, wordless vocal parts. In the second part of "Jeden" we hear dark, spartan ambient landscapes, naturally dominated by electronic keyboards.

The ten-minute "Two" initially offers a fragile mesh of glockenspiel- and vibraphone-like sounds (including possibly kalimba, a South African thumb piano). This transitions into a melancholic electronic section with subtle rhythm, electric piano and keyboard sounds.
At the beginning of "Drei" we hear a meditative floating soundscape, which is soon joined by a simple electronic rhythm. Wolfram Spyra's and Chris Lang's keys are accompanied here by the restrained guitar and violin solos.
In the keyboard parts of the fourth track, there is a return to the "Berlin School" a la Klaus Schulze. This is counteracted by a Kraftwerk-like rhythm and by guitar solos that are no longer so restrained. Wolfram Spyra's steel cello also appears to be used briefly here.
The closing "Quinto" sounds - due to the guitar solos that don't really fit to the rest of the band - like an instrumental of a combo that can't or doesn't want to decide between atmospheric electronics and jam rock.

250 Wireless Headphones and Transmitters were sponsored by Sennheiser (thanks!!!)